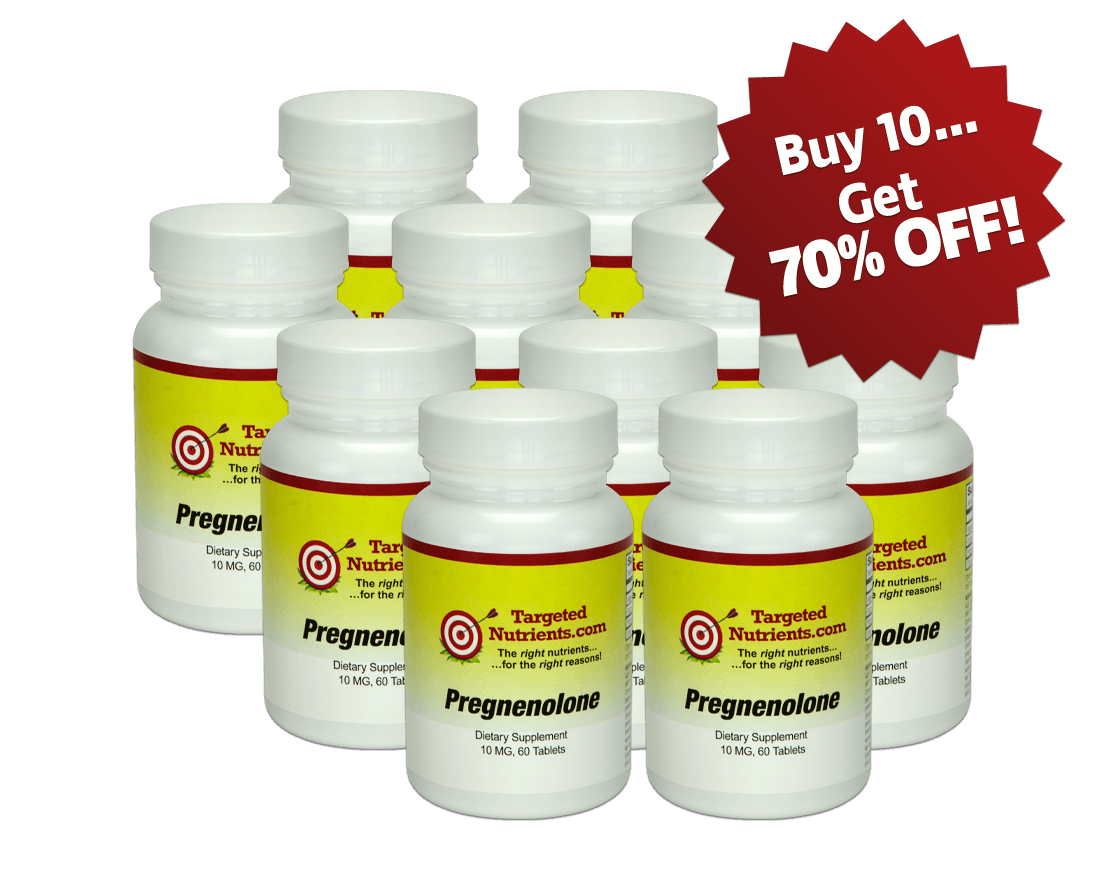 Learn more about Pregnenolone below…

Can this safe, potent natural supplement boost your vitality and help reverse symptoms of pre-mature aging?

Pregnenolone, like DHEA, is a completely natural hormone manufactured in the body. Indeed, pregnenolone is the grand precursor from which almost all of the other hormones are made, including DHEA, progesterone, testosterone, the estrogens, and cortisol. This is why it has been called the “mother hormone.”

Pregnenolone has been found to be 100 times more effective for memory enhancement than other steroids tested. Indeed, it appears to be the most potent hormonal memory enhancer ever studied.

What’s more, pregnenolone has been widely reported to make people feel happier too due to its well-known mood-heightening qualities.

And in medical studies, it has been demonstrated to enhance performance on the job and dramatically increase mental alertness while helping to relieve both stress and fatigue simultaneously.

Made from cholesterol, pregnenolone is a completely natural steroid hormone produced primarily in the adrenal glands, but in smaller amounts by many other organs and tissues of the human body, including liver, brain, skin, gonads, and even the retina of the eye.

However, as is the case with the natural hormone precursor DHEA, pregnenolone levels decline with age.

Many physicians and scientists believe that replacement of pregnenolone to youthful levels is an important step in the treatment of premature aging. If you’re feeling “older than your days,” then pregnenolone may be just what you are looking for.

In fact, pregnenolone may be one of the most important hormones because it seems to have a balancing effect. It is a precursor to many other hormones and scientists say it appears to be able to bring the levels of other important hormones up or down as, needed.

In other words, unlike synthetic prescription hormones that can skew and disrupt you hormonal balance over time, pregnenolone doesn’t appear to throw other hormones out of balance. Instead, it helps balance all hormonal levels.

Other widely reported benefits of pregnenolone include increased resistance to effects of stress, dramatic improvement of mood and energy, reduced symptoms of PMS and menopause, improved immunity, enhanced libido in both men and women, and repair of myelin sheaths (the protective covering around our nerves that slowly gets stripped away as we age, leading to ticks, tremors and peripheral neuropathies/nerve pain).

Pregnenolone also operates as a powerful neurosteroid in the brain, modulating the transmission of messages from neuron to neuron, and strongly influencing learning and memory processes.

In other words, it helps you think quicker, understand and retain more complex topics, and even speak with greater clarity.

What’s more, supplementing with small amounts of pregnenolone – anywhere from 5 mg. to 20 mg. per day – is widely reported to help the body increase production of other needed neurosteroids, which many experts believe helps improve your quality of life by rejuvenating the mind and body to more youthful functioning.

Researchers have been studying the impact of hormones on learning and memory for many years. Various studies have found that pregnenolone significantly enhances motivation, the ability to acquire knowledge, and long-term memory.

For example, a group of industrial psychologists conducted studies in the 1940s to test pregnenolone on both students and workers for the ability to enhance job performance.

The same researchers conducted another study on factory workers to see if pregnenolone could improve their work productivity.

Improvement was also noted, but to a lesser extent, in workers who got paid a fixed wage regardless of their productivity levels.

Not only did pregnenolone improve productivity for both groups, but the workers also reported enhanced mood.

Yet despite incredibly successful results, research on safe, natural pregnenolone was halted in the 1950s when synthetic cortisone drugs became available. Because pregnenolone, unlike cortisone, couldn’t be patented, pharmaceutical companies had no financial incentive to pursue the research.

Since that time independent medical studies and observations by clinical researchers have demonstrated that pregnenolone shows tremendous potential in an amazing array of conditions, many of which are associated with alleviation of the potentially debilitating effects of pre-mature aging.

What’s more, a number of cutting edge medical researchers and scientists believe this is only the tip of the iceberg. Based upon newer research conducted by independent researchers, it is further believed that pregnenolone may also:

Additionally, according to more recent research pregnenolone may also help:

This means that, unlike some of the synthetic prescription hormones such as testosterone, the use of pregnenolone does not appear to inhibit the body from producing its own stores of the hormone.

Indeed, according to Dr. Peat, studies show that oral supplementation of pregnenolone actually enhances the body’s ability to make its own pregnenolone naturally!

What the Experts Are Saying…

“The most potent memory enhancer yet found.”

“Pregnenolone very quickly helps fatigued, stressed people regain their ability to handle stress, sometimes with a single dose. It also tends to improve function of the thyroid and other glands. It can have a calming effect on the emotions, giving a mood of resilience and an ability to confront challenges. Also, people have noticed that pregnenolone has a ‘face-lifting’ action, produced by improved circulation to the skin, and by an actual contraction of some muscle-like cells in the skin.”

” Pregnenolone…reduces allergic reactions, lessens arthritis inflammation and produces a relaxing and mildly euphoric “stress buffer effect”, without any of the negative side effects of cortisol…Pregnenolone improves mood and has a mild antidepressant effect…[it] also improves energy levels by protecting your energy-producing mitochondria from toxins, which would otherwise damage the mitochondria.”

“Pregnenolone has been studied extensively since the 1940s…One of its most important actions is to counter the damage caused by the natural stress hormone called ‘cortisol.’ Cortisol is helpful in modest amounts but is toxic at higher levels. Pregnenolone’s ability to block excess cortisol levels may be one of the main reasons for its known memory-enhancing and mood-boosting effects .”

“It is now known that pregnenolone is one of the major hormones in the brain…It protects brain cells from injury caused by stress and fatigue, and an adequate amount has a calming effect on the emotions, which is part of the reason that it protects us from the stress response that leads to an excessive production of cortisone. People feel a mood of resilience and an increased ability to confront challenges.”

“Some people find pregnenolone improves energy levels, vision, memory, clarity of thinking, well-being, and often sexual enjoyment or libido. Pregnenolone may be considered a good brain enhancer in those who are deficient. Studies in rodents show pregnenolone to be one of the most effective and powerful memory boosters. Pregnenolone may increase levels of acetylcholine in the hippocampus and other memory regions in the brain. Some women report lessening of hot flashes or premenstrual symptoms.”

“Pregnenolone seems to be the most effective bioidentical hormone for memory improvement…As is the case with the steroid-hormone precursor DHEA, pregnenolone levels decline with age. Many physicians and scientists believe that replacement of pregnenolone to youthful levels is an important step in the treatment of aging and symptoms of aging. Pregnenolone may be one of the most important hormones because it seems to have a balancing effect. It is a precursor to many other hormones and may be able to bring the levels of other hormones up or down as needed.”

Where to Obtain the Very Best
Form of Pregnenolone…

Unlike synthetic prescription steroid hormones which can sometimes have terrifying side effects, pregnenolone is completely natural (made from an extract of the Dioscorea yam), and clinical studies have shown it to be virtually free of side effects when used as directed.

Targeted Nutrients carries therapeutic-quality pregnenolone in the highly recommended 10 mg. dosage. You get 60 tablets per bottle – a one-month supply for the average person.

Unlike other vendors who sell cheap, Chinese-made pregnenolone, Targeted Nutrients pregnenolone is U.S. manufactured, produced in an FDA-approved, certified GMP (Good Manufacturing Processes) laboratory, so you can rest assured of its impressive quality and safety.

The tiny chewable tablets are sweet-tasting, and can easily be broken in half for people who prefer to use lower dosages. (People normally take between 5 mg. and 10 mg. per day for age-related benefits, and up to 20 mg. per day for stronger therapeutic benefits such as for fatigue, emotional exhaustion, mental clarity, or as part of a long-term anti-aging program.)

If you’re anything like me and could use a nice mental lift from time to time, pregnenolone may be just what you’re looking for. I often take pregnenolone two or three times a week (in 20-30 mg. doses) just to experience that profound lift in my step that it provides!

Or if you’re looking for something that will seriously augment your personal anti-aging program, you might want to consider adding smaller daily doses (5-10 mg.) of pregnenolone to your daily supplement regimen. Not only will pregnenolone make you feel better, but it will also help make all of your other supplements work better, too!

P.S. – In clinical research pregnenolone has been demonstrated to be one of the safest and least toxic substances ever tested, with dosages in the hundreds of milligrams showing no toxicity whatsoever. While much smaller doses in the 5 mg. to 20 mg. range are widely used in nutritional supplementation programs, as with all supplements you should nevertheless tell your doctor if you are taking pregnenolone. Additionally, men diagnosed with prostate cancer (which theoretically may be worsened by increased testosterone levels) and women with breast or ovarian cancer (which theoretically may be worsened by increased estrogen levels) should check with their doctors first before taking pregnenolone. Men with high PSA (prostate specific antigen) blood levels (possible indicator for undiagnosed or future prostate cancer) should also check with their doctors first. Finally, because of pregnenolone’s beneficial “uplifting” effects on the brain (i.e., it increases the firing of the neurons between the synapses for quicker thinking and greater clarity), people known to suffer from epileptic seizures or who are taking an anti-seizure medication such as Dilantin, Depakote or Tegretol should probably only use pregnenolone with their doctor’s supervision. Finally, people diagnosed with heart palpitations or arrhythmias should also check with their doctors first before using pregnenolone due to its lightly stimulating and uplifting effects on the body and mind. Always check with your doctor first before starting any new nutritional supplement regimen.)

This 70% Off Sale on Pregnenolone Expiring February 2021 offer is limited to stock on hand; no rain checks are available. It is not valid on prior purchases. All sales final, no returns or exchanges. The customer must pay applicable AZ sales tax. Offer may not be combined with any other sale, promotion, discount, code, coupon and/or offer. This offer has no cash value. It cannot be sold or otherwise bartered. Void where prohibited, taxed or otherwise restricted. This offer applies a portion of the discount amount to each of the items. Targeted Nutrients has the right to end or modify any promotion at any time. Other restrictions may apply.

The information provided on this site is intended for your general knowledge only and is not a substitute for professional medical advice or treatment for specific medical conditions. Always seek the advice of your physician or other qualified health care provider with any questions you may have regarding a medical condition. The information on this website is not intended to diagnose, treat, cure or prevent any disease. Never disregard medical advice or delay in seeking it because of something you have read on the Targeted Nutrients site. Products sold on this site are for personal use and not for resale. All orders placed through this website are subject to Targeted Nutrients acceptance, in its sole discretion. This means that Targeted Nutrients may refuse to accept, or may cancel, any order, whether or not it has been confirmed, without liability to you or any third party. Targeted Nutrients reserves the right to discontinue any program or offer.